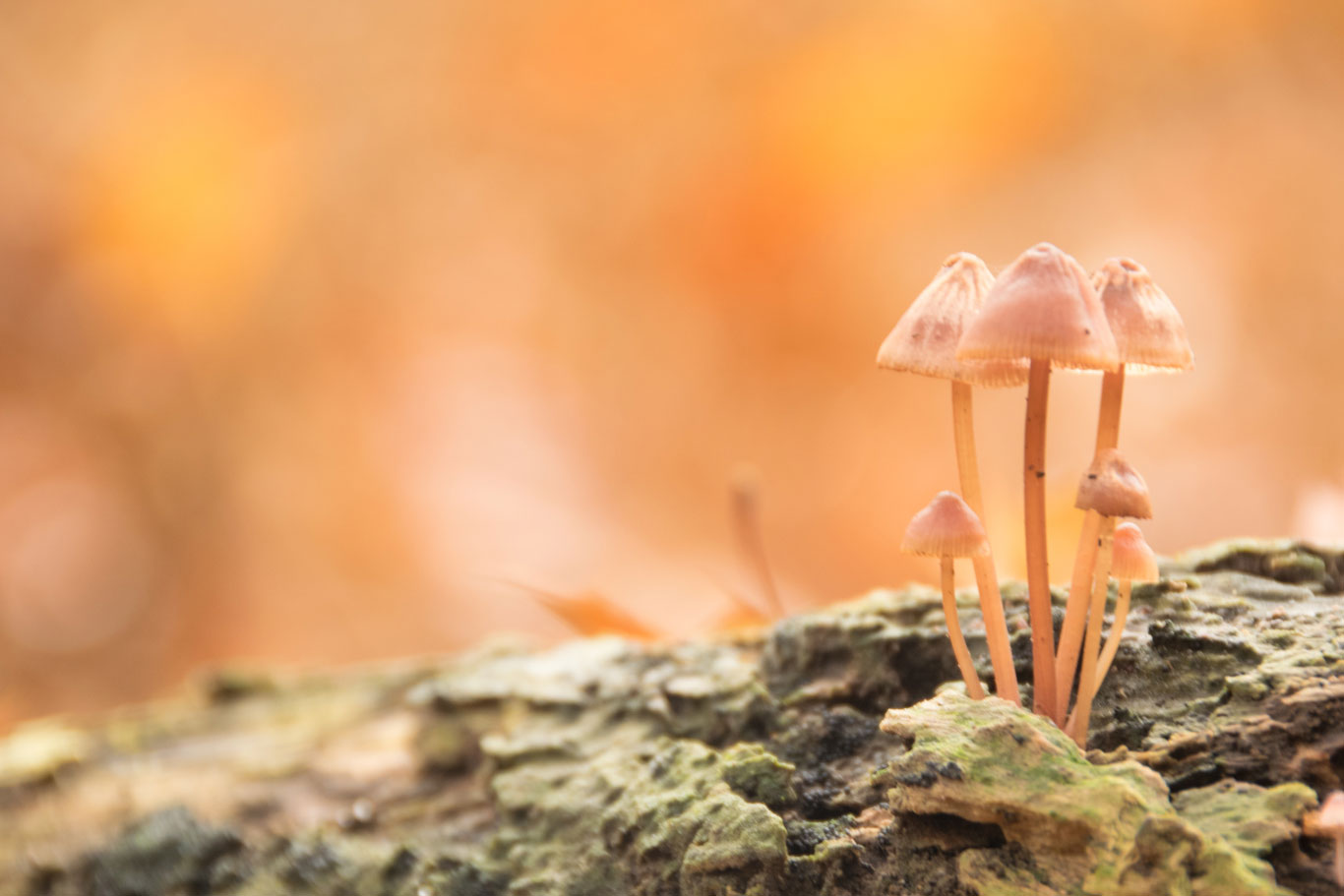 How Psilocybin Mushrooms Works On Us & FAQs.

Psilocybin is found in more than 180 mushroom species around the world.  When consumed, our body metabolizes psilocybin to psilocin, a compound similar to serotonin.  Serotonin is a crucial part of our nervous systems, related to mood and rest.

How does psilocybin affect the brain?

Psilocin is structurally similar to the serotonin neuro-receptors, and therefore is able to stimulate its receptors.  Serotonin is a key part of our neuro system responsible for mood and well-being.  Serotonin also connects brain cells and nervous systems— affecting our bodily functions such as sleep and digestion.

Claustrum region of the brain

A Johns Hopkins University of Medicine study showed psilocybin slows down the claustrum region to 15-30%.  The claustrum region, deep inside our brain, is difficult to access and study.  But is widely believed to be responsible for setting attention and switching tasks.  This correlates with participants feelings of disconnect from ego, and sensitivity to surroundings.  Researchers found psilocybin affected connections in the brain that influence attention, hearing, decision-making and memory.

What causes the psychedelic effects of psilocybin?

Psilocybin suppresses our brain’s tendency to filter out information.  At higher doses, senses overflow to the conscious mind.  This may cause hallucinations and change in perception.

What are the benefits?

Stress is an unavoidable part of evolution, and can only be managed.  Psilocybin helps manage stress in two crucial ways.

Psilocybin stimulates the prefrontal cortex, shifting functions away from the “primative brains.”  From this, psilocybin is further believed to suppress the amygdala, associated with “fight or flight” response.  This also allows the body to maintain homeostasis— resting balance of body functions.  Stimulating our brain associated with perception is effective against stress and anxiety.  For this reason, mindfulness and meditation are well documented to help stress.

Prolonged stress is associated with a deficiency in serotonin, affecting your body’s ability to rest.  Prolonged deficiencies can lead to severe illness, such as leading to depression.  Psilocybin stimulates serotonin receptors, a key factor in our mood and physical well-being.

For these reasons, enthusiasts believe psilocybin is a useful tool alongside meditation.

In numerous studies, participants reported focus and mood to be the most prevalent characteristic.

Psilocybin improves focus by decreasing the activity in areas of the brain (claustrum region) believed to be associated with attention and switching tasks.  “Microdosing” below the psychedelic state,  widely believed to improve focus and cognition.  This is opposed to overflowing the sense with a psychedelic dose.

Therefore, psilocybin and psilocin affects the intertwined relationship between focus, mood and motivation.

Psilocybin is most publicized across mainstream media for treating difficult types of depression, otherwise untreatable through pharmaceutical interventions.  Recipients are also not prone to abuse and addiction as with other drugs.

Psilocybin and psilocyin are able to supplement a deficiency in serotonin.  By reacting with serotonin receptor (5-HT2A), psilocybin activates glutamate neurotransmitters. Glutamate plays an important role in learning and memory.  In otherwords, Psilocybin improves our neuroplasticity— our brain’s ability to create new connections and learn new behaviors.  Depression is also associated with a decrease in neuroplasticity.

At the same time, brain scan imaging shows decreased stiumation of serotonin 2A receptors, in the default mode network (DMN) of the brain.  The DMN is associated with the introspection.  In those who suffer from depression, the DMN is lit up with activity— most likely negative about self.  Many psychologists refer to this as “the ego”.

In one of the most successful smoking cessation studies a few dosages of psilocybin helped smokers quit for a year.

Psilocybin improves the brain’s neuroplasticity— the ability to develop new neural connections.  By reacting with the serotonin receptor (5-HT2A), psilocybin can help us learn and unlearn habits.  Also, by decreasing activity in the default mode network of the brain, psilocin is believed to decrease cravings.

Studies have also shown psilocybin can be helpful against challenges related to trauma, menstruation, eating disorders and cluster headaches.

How to use Psilocybin?

Psilocbyin is commonly used for treatment via macrodosing or microdosing.

At below a psychedelic dose, psilocybin still retain its benefits.

Dr. James Fadiman, who popularized microdosing, recommends consuming tiny doses only every three or so days.  The effects of psilocybin linger even during days without dosing.

What are the side effects and dangers?

Psilocybin is non-toxic, and has a low risk of abuse and addiction.  According to a 2017’s Global Drug Survey, Magic Mushrooms are the safest drug.  However, Psilocybin is not without it’s caveats.

Consuming a psychedelic amount of psilocybin can cause severe psychosis and delirium.

Individuals with a history of mental illness such as schizophrenia have increased risk of having a “bad trip.”  A Bad trip can result in severe impairment, confusion, horrifying hallucinations, paranoia, and nausea among other undesired side effects.  A very bad trip can lead to hallucinogen persisting perception disorder (HPPD), in which symptoms can persist for week to months.  HPPD is much like a traumatic recollection of a terrible psychedelic experience.

Because psilocybin is unregulated, one needs to be careful when purchasing off the street.  Due to the environment in which mushroom grows, mold and fungus, and even poisonous mushrooms can form in crops.  Consuming contaminated mushrooms can result in illness, organ damage and even death.

Even counterfeits magic mushrooms, regular mushrooms laced with LSD and phencyclidine (PCP) have been found on the black market.

Psilocybin is currently an unregulated drug, rapidly gaining steam in the medical world.  Even the FDA is calling psilocybin “a breakthrough therapy” and is fast tracking its path to legalization.

Canada has legalized psilocybin’s use for pallative care.  It is up to local municipalities to enforce the laws against possession and sale.  For example, a recent motion to prevent the sale of magic mushrooms was defeated by Vancouver council.

Oregon is the first state in America to legalize psilocybin for medical use, with more states to follow.  Psilocybin is already decriminalized in various states, including Michigan, Denver, Colorado, Oakland, California and Washington D.C.

Because psilocybin creates tolerance very quickly, it is difficult to develop a compulsive addiction.  Psilocybin and psilocin doesn’t cause physically dependency, resulting in withdrawl symptoms.  Because of this, psilocybin is becoming more attractive to medical professionals as an alternative to pharmaceutical drugs to treat various mental illnesses.

In studies, psilocybin has been shown to be effective against addiction.

Are you interested to learn more about psilocybin?  We’ve compiled a library of our favourite reads thus far here.